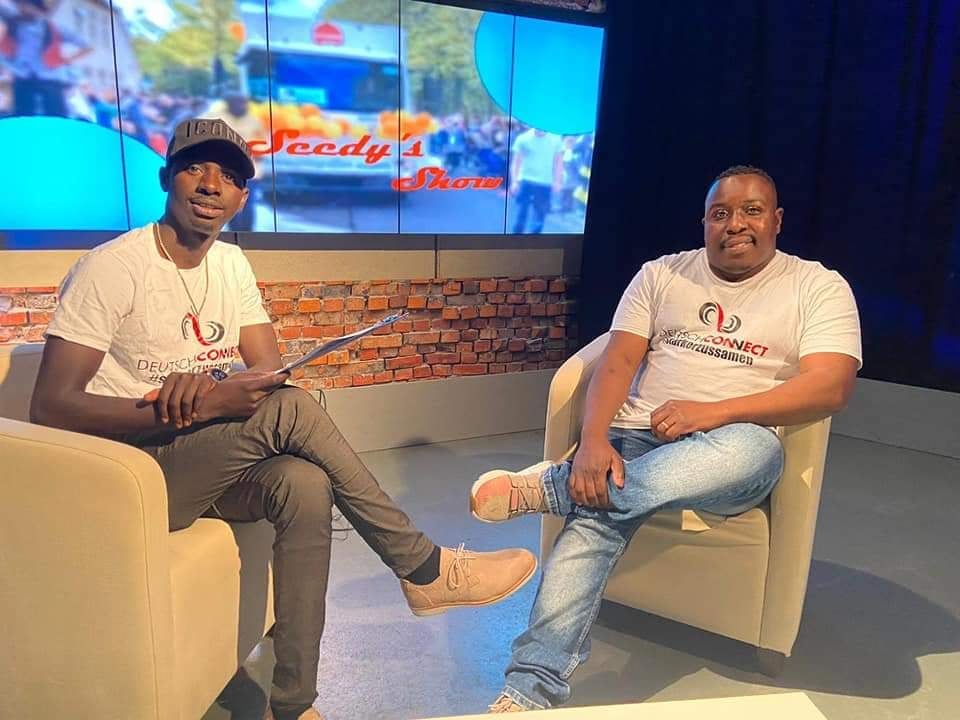 As a refugee, he often lamented why there are less African businesses in Germany and also why there are few Germans involved in doing business in Africa.

Armed with the knowledge and faith in the belief that ‘Your Network is Your Networth’,  Zimbabwean born Kumbirai Chipadza is bridging the gap between Africa and Germany business ecosystems by establishing an initiative that gives information, creates synergies, networks, Market and Investment Linkages.

For his illustrious efforts, he has been recognized by the German government, which has honoured him by romping into the powerful team of 40 influential young African and Germany leaders.

He remembers: “When I came to Germany in 2016 I realised that people in Africa had misconceptions about Germany, like racism which was totally different from how I was received and continue to stay; likewise a lot of Germans think Africa is one country or that we live in the Stone Age. So I wanted to dispel these myths but more importantly with the announcement of the Marshall Plan for Africa, which seeks to accelerate Economic Cooperation between Africa and Germany, I saw great opportunities as both Ecosystems need each other”.

Chipadza who is the founder and CEO of DeutschConnect, a Germany-based Afrocentric consultancy that links African and German businesses adds: “As Africa needs technology, innovation, investment, Infrastructure and Germany needs new markets, skilled Immigrants and food and beverage that Africa can provide’.

Born in the former asbestos mining town of Zvishavane, Chipadza has been named as one of the 40 young African and German business leaders in a pioneering programme called the African German Young Leaders in Business (AGYLE).

Under AGYLE, the young immigrant leader and others have been tasked with accelerating Economic Cooperation between Africa and Germany. After the German Federal Ministry for Economic Cooperation and Development and the German Agency for Business and Economic Development announced the names to the young leaders, Chipadza told theafricangazette.com that he had great faith that AGYLE will destroy some of the hurdles faced by both parties when it comes to doing business together.

He says there is a lot of work to be done by AGYLE because Africa and Germany are only doing 2% trade together both in terms of import and export and mainly in Motor Industry. So there is a huge potential once problems such as the risk factor, ease of doing business and corruption are removed.

President Siegfried Russwurm from Federation of German Industries ( BDI ) said that one of the main challenges to Accelerating Economic Cooperation between Africa and Germany is that most German decision makers have not been to Africa.
Through his Germany based DeutschConnect, Chipadza announced that: “We have come up with Startup Safari where we will take German businesses to Africa for tourism and business and our first is in Namibia in partnership with Startup Namibia Deutsch Connect”.

About some of the problems his linkages company faced in Germany, he narrates: “Initially we faced challenge of funding and investment and I had to bootstrap for a long time but we have also learnt that money follows ideas and we are in a good place now. Secondly acceptance in an ecosystem that has been predominantly dominated by Germans and Europeans. To come in as a black African takes time for people to trust you but our passion and products have helped us”.

“We are working to bring Glytime Foods from Southern Africa into the German Market as well as Rtnloaded a Logistics start-up from Southern Africa. We also work with German companies looking for market in Africa like Zimpertec – an Energy Company. We have worked with the German government Agency (GIZ ) on their Leverist.de platform,” says Chipadza.

In 2020 Africa accounted to 5% of the 21.2 million people of migrant background in Germany and according to the KfW Development Bank, one in every five businesses in Germany is migrant owned. However, African representation in the business sector is appalling. Africans are overrepresented in cleaning, warehousing, care work and food production jobs.

Another young aspiring entrepreneur based in Hamburg, 29 year old Mozambican born Graca Santos, attributes this state of affairs to a number of factors such as: the system already not in favour of black Africans, lack of information, limited networks, and lack of support from family, friends and other institutions.

She is planning to open an African and Portuguese themed restaurant and club in Hamburg, but with a large extended family to support back in Mozambique, she fears she may not realize her dream soon enough.

“Lack of capital to start businesses is a big hindrance which is necessitated by lack of access to bank loans and credit due to immigration status or viewed as “risk “by banks. The language barrier and German bureaucratic system also makes it difficult for us as Africans to access the opportunities available for us,” suggests Chipadza.

It has been argued that migrants are more suited to entrepreneurship because they already are seen as risk takers by the fact that they left their countries for various reasons and so can identify opportunities in face of problems. And also that migrants have the ability to identify new niche markets, serving existing customers differently and linking markets.

As part of some of their activities in the mother land, Deutsch Connect which is registered in South Africa and is a member of the SA German Chamber of Commerce has trained over 500 young people in SA through the Factory 24 Entrepreneurship Program in partnership with Afrolynk.

“Kumbirai of DeutchConnect is my ‘go to guy’. Their holistic approach and versatile network, agility and flexibility has provided many of my clients and associates with profitable opportunities, solutions and suitable contacts for linkages, skills advancement and networking.’

Mkhize adds that access to financial and non-financial support has been another secondary pillar of their relationship with DeutchConnect.

Currently, DeutchConnect is looking for partners in German language courses and vocational training for building a platform for young South Africans and Talent Acquisition by German companies as Germany needs about 400 thousand skilled Immigrants a year.

And as part of their networking programme, they advocate for young South Africans who would like to do apprenticeship in Germany.

Loyd Zendaenda from Zimbabwe, now a student in Germany praises the DeutschConnect school because it was a stepping stone for him to be selected for a volunteer program in Germany.

“I started learning Deutsch with the school in November 2020 up to date. We managed to cover the whole syllabus of A1 within this period and we were now doing A2. I managed to come to Germany now and to my surprise all what my teacher (Frau Amanda) taught me is exactly how it is here. I am so happy to implement everything she taught me from the way to introduce myself, the way to greet, the way to order food in a restaurant, the grammar itself, the German way of living. It’s like a dream come true to me because literally everything I learnt is now into practice, “testifies Lloyd.

Nigerian born, Research Scientist, Dr Taiwo Fagbemigun now with the Georg August University of Göttingen says he is motivated by Chipadza and his team in mobilising human, material and financial resources for the socio-economic development of Africa. “And of course, with your support and your team at @deutschconnect, we look forward to a mutually benefiting cooperation that will move us closer to the goal,” says the Doctor.